Free Dec. 5-9 on Amazon -- my funny short story AN ARTISTIC TEMPERAMENT -- featuring another favorite character of mine, Cyril Payne, who might have stepped out of a Saki story. 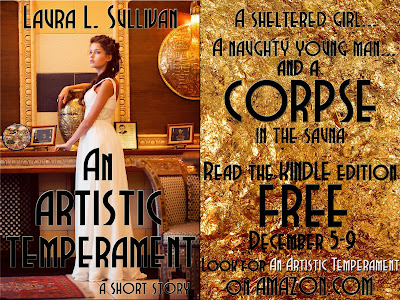 Here is the Amazon description:


AN ARTISTIC TEMPERAMENT is another quirky comedy from children's author Laura L. Sullivan. Though intended for adults, it features a sixteen year old girl as one of its central characters.

Cyril Payne, one of society's most delightful parasites, is staying at the seaside at his friend's expense. Though he'd much prefer to lounge in the shade and nibble at plums, he leaps languidly to the rescue when his friend announces he is bored. Cyril lights upon a sheltered teenaged girl and begins to spin his web of meddling machinations. Before long, the poor girl finds herself in a sauna with a dead body. Will she be scarred for life, or embark on a new career?

With echoes of Saki and Wodehouse, AN ARTISTIC TEMPERAMENT is a quick, clever romp that introduces one of Ms. Sullivan's favorite characters, Cyril Payne.

You can get your very own free copy here.

(And please, please review! Just a line or two on Amazon is very helpful.)

Posted by Laura L. Sullivan at 9:44 AM No comments:

One of my favorite characters -- LANA HALLIDAY -- FREE

For the next five days, my short story LANA HALLIDAY will be free on Amazon. 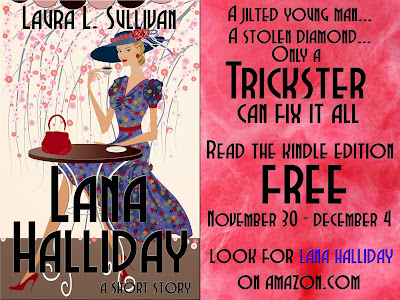 The captivating, sly LANA HALLIDAY is part detective, part guardian angel, part trickster. When her friend Ronnie Acton loses his gold-digging fiancé -- and the huge diamond engagement ring he gave her -- Lana steps in to set things aright. Her methods aren't quite ethical, but they are always comical.

You can get your free copy here.

Posted by Laura L. Sullivan at 3:09 PM No comments:

He Hunts Butterflies... With Guns 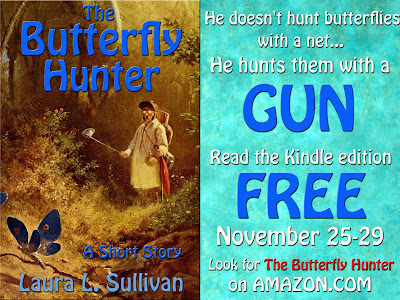 O. Beauford Jasper began life as a contented baby surrounded by a garden of flowers. But when one of the flowers torments him by flying away, Jasper begins a lifelong obsession with butterflies that leads him to the wildest reaches of the globe. But he doesn't collect butterflies – this butterfly hunter slaughters them with a gun. He stalks the world's rarest butterflies, and takes joy only in seeing them obliterated by a bullet.

But Jasper gets his comeuppance deep in the Amazon rain forest when he tries to shoot a butterfly thought to be extinct.

You can get the Kindle edition FREE on Amazon November 25-29. Happy reading! (Well, rather disturbing reading, but you know what I mean.)

xo
Laura
Posted by Laura L. Sullivan at 10:52 AM No comments:

My next FREE story is the science fiction short, LARVAL. It will be free Nov. 20-24. 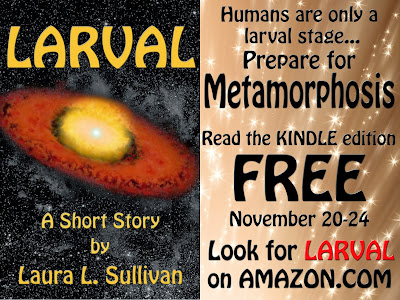 In LARVAL, two recent graduates with mountains of debt and grim prospects meet two girls who claim that humans are larval stages which, on earth, never undergo metamorphosis. The girls are refugees who want to keep their fleshy bodies all their lives instead of changing into all-knowing energy creatures like the rest of their species.

One of the human men – a workaday scientist stuck in a dead-end job of ceaseless pipetting – thinks metamorphosis is a wonderful idea. But when he passes himself off as one of the escapees to a bounty hunter, he finds that becoming an intergalactic creature of immense power isn't as good as it sounds. LARVAL is a dark, insightful tale for science fiction fans.

You can get LARVAL for FREE here on Amazon.
Posted by Laura L. Sullivan at 11:05 AM No comments: 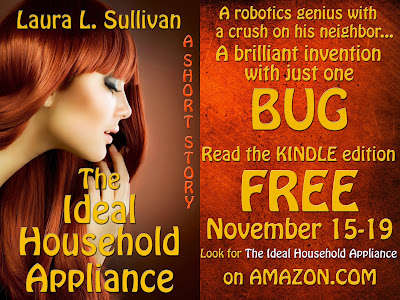 In THE IDEAL HOUSEHOLD APPLIANCE, a socially averse entomologist with an interest in robotics has created the perfect cleaning gadget – artificial roaches that hide in the daytime but scurry around at night cleaning up debris. They have all the benefits of insects, without the feces and disease. But when he develops an unhealthy obsession with his neighbor, and her violent ex-husband returns, the scientist discovers that his new invention still has a few bugs.

You can get your free copy here.

Mark your calendar for FREE ebooks!

Just so you can plan to download all of your FREEBIES, here is a calendar of all of my holiday giveaways. I have some science fiction, some adventure, a couple of kids stories, and some literary stories as well -- all for you. Enjoy! 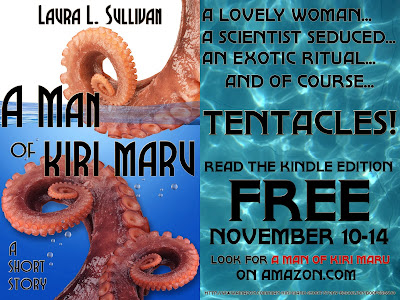 As my holiday gift to my readers, I'm giving away every single one of my short stories -- FREE on Amazon in Kindle format. For five days, from November 10-14, you can get a free copy of A MAN OF KIRI MARU right here. (Other free titles will follow, through December 24.)

Here is what A MAN OF KIRI MARU is about:

In the middle of the Pacific Ocean, bathed by the Humboldt currents, lies the island of Kiri Maru. It is a strange and lovely place, where time is so fluid that days and nights merge, but the hours of a new moon are never remembered. The natives had a god once, but he died in a drunken fall. Now the islanders live on luck, generated by the manner of a person's death. Being ripped apart by a wild animal is considered very lucky indeed.

To this island comes a scientist, searching for the elusive giant squid. Instead he finds love in the arms of a young woman, the daughter of a man of Kiri Maru and an American anthropologist.

She ensnares him, body and soul, and wants to bear his child. But first he must become a man of Kiri Maru himself... if the Red Brothers will accept him. Who are the Red Brothers? The man-sized Humboldt squid who haunt the local waters, and are said to be so jealous of human men that they sometimes... well, you'll see. 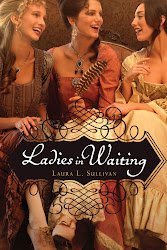 Order from your favorite bookseller!